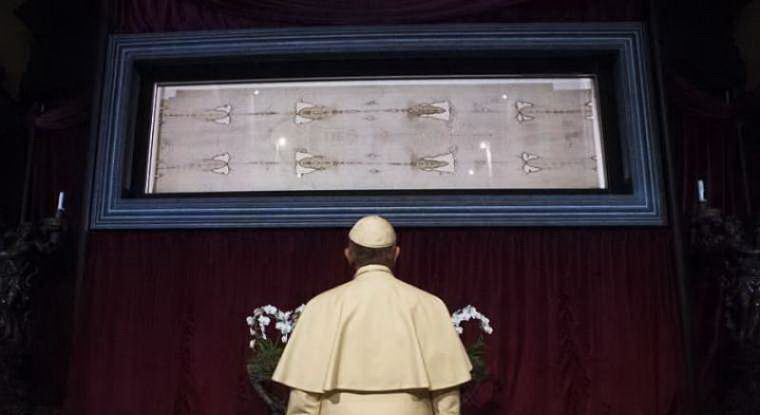 “I believe that the Holy Shroud is the image Jesus Christ formed during His Resurrection” said Professor Giulio Fanti of the University of Padua.

Traces possibly of Byzantine coins have been found on the Holy Shroud, which according to legend, was the cloth used for the burial of Christ after his crucifixion. The discovery is included in a paper published by a team of researchers from the University of Padua in the Journal of Cultural Heritage and presented at the Conference on the Shroud of Turin in Canada. The paper puts forward the argument that long before the year 1000, gold Byzantine coins bearing the image of Christ had been wrapped in the Shroud.

A study conducted by Giulio Fanti and Claudio Furlan, using an environmental scanning electron microscope combined with an X-ray spectrometer, resulted in the detection of traces of “Electrum”; an alloy of gold and silver with a small percentage of lead. At the same time, the percentage was measured of elements contained in Byzantine coins minted between the 11th and 12th centuries. The investigation discovered that there was a complete match between the traces of the microelements found in the Shroud and the Byzantine coins. According to Fanti, this finding contradicts the dating in 1988 with the use of radioactive carbon 14, which ruled that the Shroud belongs to the 14th century. The new finding reinforces the hypothesis that a linen imprint was created by pressing a coin onto the fabric, for personal worship reasons.

A numismatic study presented at Pasco Conference on the Shroud in 2017, an object of a book in preparation, confirmed the results of three different alternative dating methods (mechanical and chemical) that dated back the most important Relic of the Christianity to the first century A.D., the period in which Jesus Christ lived in Palestina.

A group of Paduan scholars has discovered what happened during the last hours of Jesus’ life. The new research sheds light on the mystery of the Holy Shroud, the symbol of the death and resurrection of Christ. According to experts’ opinion, after hours of torture, the man of the Shroud would have died of a heart attack. Studies have also been conducted on the dating of the Holy Shroud. The fabric approximately 4.4 meters long and 1.1 meters wide has a thickness of 0.34 millimeters and is soft. The linen was spun by hand, each thread of fabric is composed of about two hundred fibers.

Giulio Fanti explains: “Here in Padua we have created a machine unique in the world with which we have measured the mechanical characteristics of the individual fibers torn from a fabric similar to that of the Shroud. Lately, I have also dealt with dating at C 14 performed in 1988. I have shown that radiocarbon dating is not reliable because it does not take into account contamination caused by an explosion of energy coming from inside the sheet. From a scientific point of view, I can demonstrate that the image on the sheet can be formed by wrapping a corpse and that precisely that body must have emitted extremely intense energy“. According to Paduan scholars, it is this element that calls into question the dating of the sheet and somehow rewrites its history.

The Shroud of Turin (Second Edition)